If Bryce Harper is signed by the Philadelphia Phillies, third baseman Maikel Franco could be deemed expendable by the Phillies, and the San Diego Padres could be very interested. Here is a look at Franco and what the right-handed hitter brings to the table.

As we continue our look at potential trade candidates to fill the opening the Padres have at third base, Maikel Franco is yet another player whom the Padres could consider.

Although he was highly regarded as a prospect, he has not lived up to the hype, and only posted a 1.2 fWAR figure last season. The reality of Manny Machado potentially signing with the Phillies makes it reasonable for the Padres to consider trading for Franco. He has flashed enough potential that the team could justify bringing him in to see if he could improve in San Diego, following a change of scenery.

Let’s get into what has allowed Maikel Franco to continue getting opportunities with the Phillies, despite the fact that he has only produced a maximum of 1.9 fWAR in a single season throughout his brief career. He has hit 85 career home runs over the course of only three full seasons in the major leagues. This skill set is what has truly enticed the Phillies into giving him so many chances to play third base for the team over the years, above all else. He has also struck out at less than a 17% strikeout rate since the beginning of the 2015 season, which shows that he is a power hitter who can also make a good amount of contact. The potential in his bat has been tantalizing enough for teams to even remain interested in trading for the 26-year-old third baseman. With an average exit velocity on his home runs of 103.2 mph, it’s obvious that he has great natural power that he has gotten to with some regularity in games.

An area in which Franco could improve is in his walk rate, which was only 6.2% last season, and has remained around that throughout his entire major league career. He only struck out 13.3% of the time last year, which was the lowest rate of his career. So we have a player who should walk a little more, but does a good job of avoiding strikeouts. Also on the positive side of things, Franco just had the highest contact rate of his career last year, at 79.9%. These are encouraging signs that he showed last year, though obviously his profile is far from perfect.

The most significant issue with his profile is that he doesn’t get on base enough, which has hindered his ability to truly be an impactful hitter. Furthermore, despite his impressive power, he doesn’t hit for as many extra-base hits and home runs as he should, if he isn’t going to get on base very often. Speaking of his on-base percentage, it didn’t get better over the course of last season: 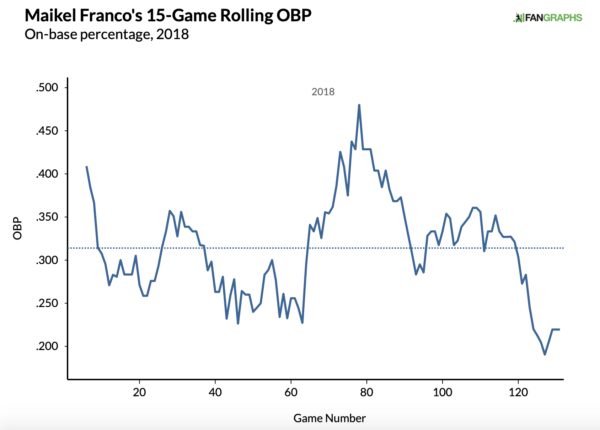 This is not a good sign and should make the Padres wary of his abilities to hit with consistency.

With such an inconsistent track record of getting on base, it would be wise for the Padres to think extensively about their options before trading for a player like Franco. Add on the fact that the team had the lowest on-base percentage in the major leagues last season, and we can see why it may not be the best idea for them to add a player who struggles to reach base with consistency on his own.

Based on the three full seasons in which Franco has hit a good number of home runs, failed to get on base with consistency, and played average-at-best defense, his profile is unlikely to change moving forward. His approach is simply too aggressive for him to get on base with any real consistency, and this also makes it significantly more difficult for him to do damage on the right pitches. If he were more patient and looked to hit the middle-in fastball instead of swinging at almost any pitch near the strike zone, Franco would already be a drastically better hitter.

Perhaps the Padres could trade for Franco with the idea of improving his approach as a hitter. If he were to truly make the right changes to the way he mentally approaches the game when in the batter’s box, Franco has the physical gifts to be a much better player. He is still young enough that it isn’t completely out of the question that he could improve his defense at third base, which would also help significantly increase his value as a player. San Diego is currently a low-pressure environment where he could improve upon his defensive abilities with little stress.

There are reasons to believe that Franco can improve enough for it to be worth acquiring him. However it’s difficult to be optimistic about him making such significant changes to his game, and it’s more realistic for the team to simply pursue more talented players. Although he is better than anyone else the Padres currently have on the roster, Franco is not a player who would be enough of an upgrade at the hot corner to justify San Diego trading for him.

A sophomore at Willamette University in Oregon, Conrad is majoring in Spanish but is also a writing center assistant for other students at Willamette. He has been a Padres die-hard his whole life and hopes to bring comprehensible statistical analysis to the site.
Tags: Maikel Franco, Padres, Padres 2019, Padres Maikel Franco, San Diego Padres