After an injury-marred start to the 2018 season, is Wil Myers finally blossoming into the all-around star that Padres fans have been waiting for?

It’s already Wil Myers‘ fourth season with the Padres, and despite his lost time to injury, he’s having a career year.

Although he has only played in forty games, he’s been worth 1.8 WAR according to Fangraphs.

Myers has posted a .266 ISO figure, which ranks 18th among all major leaguers. Aaron Judge has an ISO of .263, to give you an idea of the kind of power Myers is hitting for so far.

His wRC+ of 141 — The highest of his career to date, speaks to how well he’s hit this season. However, Myers has always been held back by his defense, something that prompted a move from the outfield to first base in the 2016 season.

After Eric Hosmer was signed by the Padres this past offseason, Myers was forced back into the outfield.

But Myers has played admirably in left field for the Padres, and has actually provided positive defensive value for the first time in his career!

If there’s a silver lining to the signing of Eric Hosmer right now, it’s Wil Myers playing a more important defensive position and actually being pretty good at it. After all, Myers does have slightly above average speed compared with the other left fielders in baseball, according to Statcast:

So he clearly has enough speed to handle the position, being somewhat faster than most other left fielders. He actually ran 28.5 feet per second in 2017 — so he must have made an adjustment to his defensive game rather than simply using his speed to improve. To start, Myers has positioned himself this season 304 feet from home plate — which is nine feet further back than the average of 295 feet among left fielders.

Before digging into more defensive metrics, it’s important to note that Myers hasn’t made an error in left field this season, which is a factor in his improvement out there so far. He has an ultimate zone rating of 3.7, and Fangraphs rates his defense as being worth 3.0 runs — seventh-best among all major league left fielders. This is clearly a player who has really improved his outfield defense, and it’s now the most underrated part of his game that people should be more aware of.

As far as his hitting is concerned, it’s mostly been classic Wil Myers spraying the ball around the field. When Myers is at his best, he’s taking pitches where they’re thrown — which is exactly what he’s been doing this season. Take a look at the Statcast defensive positioning of opposing teams against him this season: 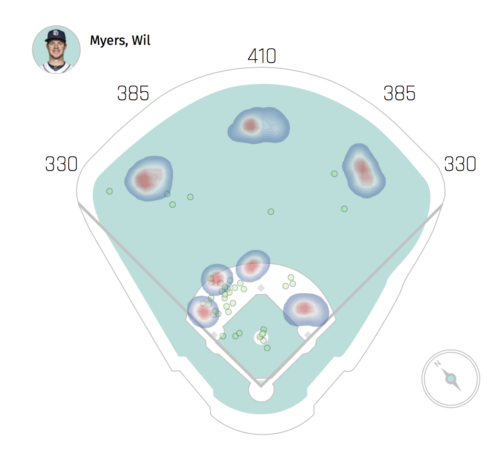 They look to be playing pretty much straight up in the outfield, with an expectation that Myers will pull most of his ground balls. Nonetheless, they are still respecting the fact that he can use the entire field when hitting. This makes it more difficult for pitchers to know where to throw to him as well, because he can hit pitches in all parts of the zone. He also hits the ball really hard when he makes contact, which makes him even better.

Something to note is that Myers saw a sports psychologist during this past offseason. The results have been excellent and his work with them looks to have really paid off. He’s swinging at pitches that he can do more damage on than he was during last season. First, look at the pitch locations where Myers has most often gotten hits during the 2017 and 18 seasons combined: 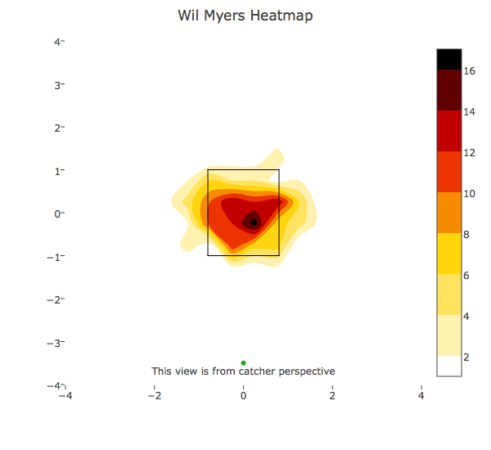 Clearly, Myers crushes pitches down the middle and middle-away more than pitches in any other location. So it would make sense for him to be swinging at pitches in those areas. It follows that he has gotten a lot of hits to right-center field in both seasons as well. Myers likely identified during the offseason that he needed to swing at those pitches more because of his success in doing so. Working with the sports psychologist probably had something to do with his adjustment, too. 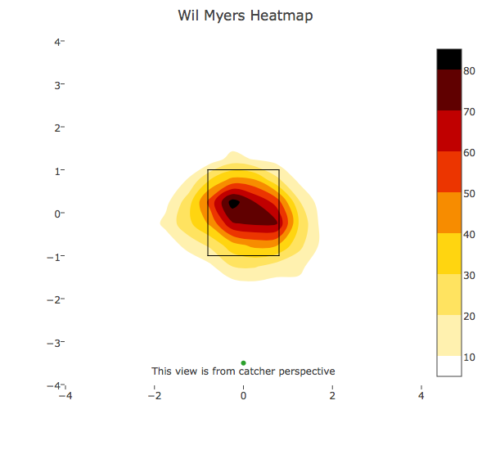 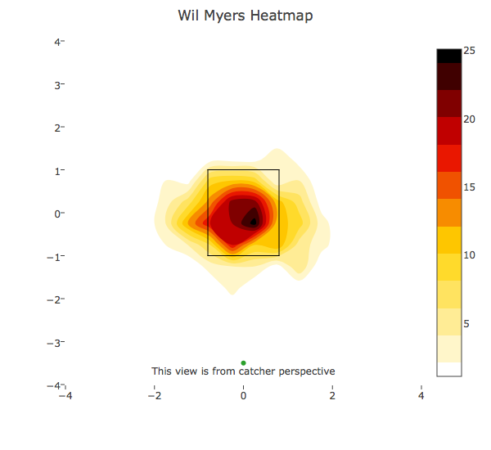 He has made the adjustment of swinging at pitches he’s best at doing damage on, which is the most likely reason for his increase in exit velocity this year in comparison with last season. He’s hitting as well as he ever has during his major league career, and picking out the right pitches has been the most significant factor in helping that to happen.

Wil Myers was a big acquisition before the 2015 season, and there have been high expectations for him as the years have gone on. Yet those expectations were always focused on his hitting, with almost an assumption that he wouldn’t ever be very good in the field. Despite that, Myers has become a much better all-around talent for the Padres. He’s playing defense well, doing a good job running the bases, and crushing pitches like he never has before. Say hello to the new Wil Myers, a player who has improved all five tools in 2018. If Eric Hosmer can’t pick it up, there’s no reason not to consider Myers the face of the franchise once again.

11 thoughts on “Is Wil Myers Blossoming into the All-Around Star that Fans Have Been Waiting For?”