On Sunday, the Bowling Green Hot Rods exposed the TinCaps’ Michel Baez as a mere mortal.

Dominating in his first five starts, Baez struggled more than usual in the 6-3 loss.

Baez compiled five wins and a 0.74 ERA in his first five starts, but the Hot Rods tagged him for six hits and five runs through five innings of work.

The Hot Rods started the scoring in the top of the third. After giving up a leadoff walk, Baez recorded two outs. Garrett Whitley singled to put runners at first and third, and then Jesus Sanchez launched a home run over the left field fence to take a 3-0 lead.

Adrian Rondon homered to increase the lead in the top of the fourth, but the TinCaps shut down further scoring by foiling a double-steal attempt. With runners at the corners, new TinCaps’ catcher Chandler Seagle threw to Fernando Tatis, Jr., who quickly fired the ball back to Seagle, tagging Miles Mastrobuoni out at the plate.

The TinCaps got on the board in the bottom of the fifth, when Hudson Potts crushed a home run to the left field concourse, making the score 4-1. 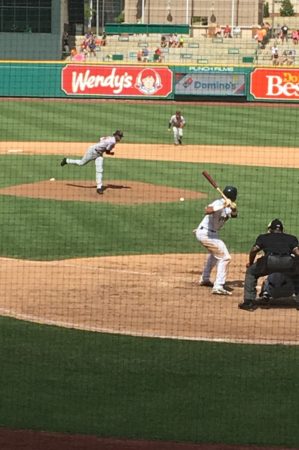 The Hot Rods added one run each in the fifth and seventh innings. In the 5th, Josh Lowe scored on a controversial call at the plate. As Lowe rounded third on a Robbie Tenerowicz single, the throw home arrived ahead of the runner, but home plate umpire Dexter Kelley judged that Lowe evaded the tag, increasing the lead to four.

With one out in the bottom of the seventh, Tatis had his second single (and third hit) of the game. After a flyout by Nate Easley and a walk for Jorge Ona, G.K. Young stepped to the plate and ripped a double to right field, scoring Tatis and cutting the lead to 6-3.

The TinCaps continued battling into the ninth. After consecutive walks to Tatis and Easley, Oña grounded out, moving the runners to second and third. After a strikeout by Young, a wild pitch to Potts brought Tatis home, making the score 6-4, with two outs and the tying run at the plate. However, reliever Deivy Mendez prevailed, forcing Potts into a groundout to end the game.