Last spring, the Chargers had the 3rd overall pick in the NFL draft and many pundits thought San Diego would pick either Ronnie Stanley or Laremy Tunsil.

But Tom Telesco and the Chargers’ front office ended up drafting Joey Bosa from “The” Ohio State University.

The former Buckeye had a stellar college career as he ended up with 26 sacks and 51 tackles-for-loss during his time in Columbus.

When he came to San Diego for rookie minicamp, it was clear that Telesco had drafted a player that was very talented and had the necessary mean streak to play outside pass rusher in the NFL.

But things turned sour quickly when Bosa’s agent and the Chargers’ front office got into a nasty contract negotiation that resulted in a four week holdout.

Thankfully, on August 29, both sides came to their senses and a deal was made.

Joey Bosa wouldn’t play for the first four games of the 2016 season, which in hindsight seems like a very terrible decision on the part of the Chargers front office.

Bosa saw the field for the first time as a professional in Oakland and did he ever made a splash. He lined up across one of the best offensive lines in football and looked like a man among boys. On that day he was in Derek Carr‘s face for most of the game. He finished his pro debut with five tackles and two sacks.

Bosa quickly became a force to be reckoned with and was being talked about in the same sentence as Reggie White and Derrick Thomas because of his stellar play as a rookie. Opponents started game-planning for him, which is the ultimate compliment in the NFL.

Here are his stats, game by game. The young defensive player was dominant at times.

For the season, Joey Bosa finished with 10.5 sacks, but it wasn’t just the sacks. When you saw him on TV he jumped out of the screen because he kept bringing pressure from the edge on nearly every passing down. 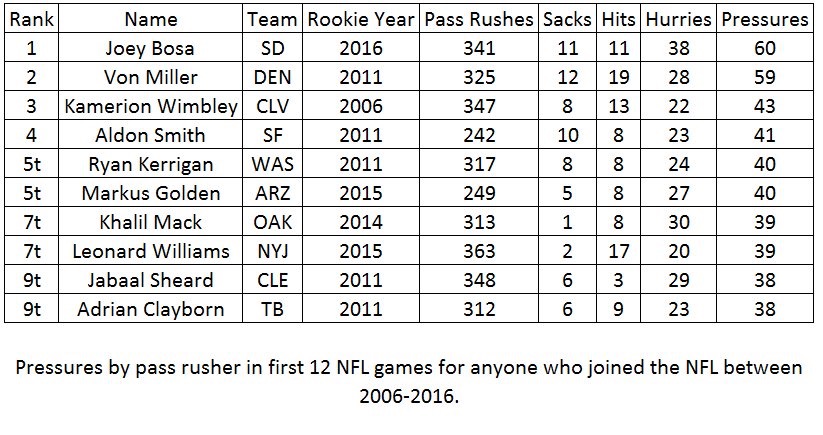 The Chargers season was a big disappointment for many fans as the team became uninteresting, but the thing that makes me hold out hope for the future is the fact that this team has a lot of young talent on the roster, and it all starts with Joey Bosa.

When you look at the recent Super Bowl champions, Denver or Seattle or even New England, they all have had one dominant edge rusher, and there’s no doubt in my mind that Joey Bosa is every bit as talented as Von Miller, Michael Bennett, or Chandler Jones. Starting in 2017, Charger fans should expect greatness out of the former Buckeye because there’s no doubt that he can achieve it.

Bosa is #1 in pressures for the first 12 games of a career. His numbers speak for them self. Look at this chart which indicates that Bosa has outperformed the names of Von Miller, Kamerion Wimbley, Aldon Smith and Ryan Kerrigan since the pressure stat was first utilized in 2006. To say he was productive was an understatement. He looks to be a force and the Chargers might have a defensive face for years to come.

I am a lawyer that loves everything San Diego!