Wil Myers hit another home run, his 22nd of the season, during the San Diego Padres’ 8-3 loss to the Cincinnati Reds on August 9.

With that blast, Myers moved closer to reaching his career-high for home runs.

He hit 28 dingers last season in his second year with the team.

Last season was also the first year in which Myers played in more than 90 games.

Before reaching 28, his career-high was 13 in 2013, the season he won the American League Rookie of the Year Award.

Wil Myers mashes an oppo tater. It’s been a while since he’s driven a ball to right field like that.

What’s more significant about his 22nd home run is that it was hit to the opposite field. This was only the second time Myers hit a home run over the right field wall. 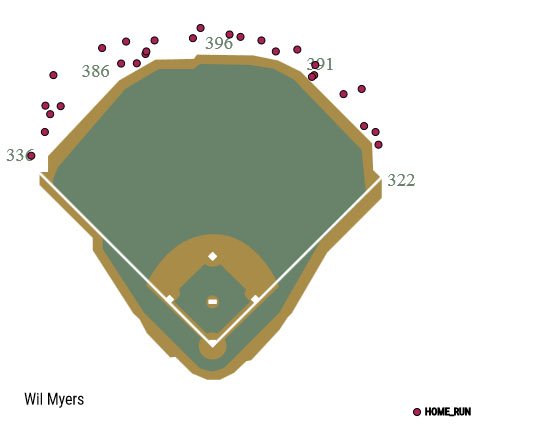 This image shows all of Myers’ 28 home runs during the 2016 season. Ten of the home runs he hit went over the wall in right field or in right-center. 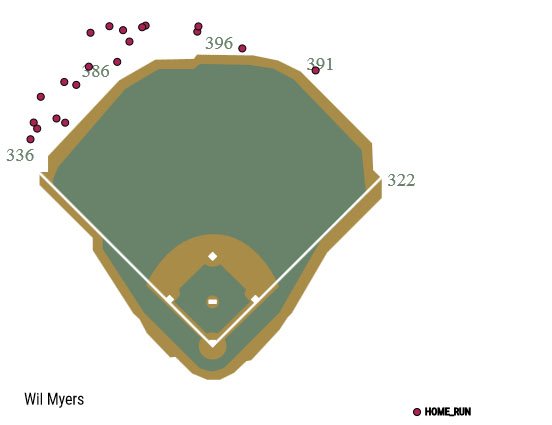 The second image shows the home runs he has hit in 2017, not counting the one he hit on August 9. Only one other dinger went over the wall in right.

To see Myers hit home runs this season has become something of a perturbation this season. He’s on pace to hit at least 33, with 50 games left in the season. Reaching a 30-home run milestone would be nice to see, considering that Myers is expected to be the face of the franchise, and was given a generous extension.

The excitement comes because Myers has under-performed in the eyes of Padres fans. He’s slugging .450, but he’s hitting a meager .238, and has struck out in 29 percent of his appearances.

Myers hit 28 in 157 games played last season. He’s played in 107 through 112 games in 2017, and unless he plays in every remaining game, won’t reach the same amount of games played. If he hits more home runs in fewer games this season, it certainly will give fans something to look forward to next season.

Manuel Margot also went deep against the Reds for his 10th home run of the season. It came in the top of the sixth inning, traveling 401 feet. Reds starter Asher Wojciechowski had a shutout up until that point. That blast made Margot the first Padres center fielder to reach 10 home runs in his rookie season.

The Padres play one more game at Great American Ballpark against the Reds, on August 10. They have a chance to salvage a tie in the four-game series.

From there, they will travel back west for a three-game series at Chavez Ravine against the Los Angeles Dodgers.