From the Jabari Blash almost-walk-off home run that was inches foul, to Hunter Renfroe going yard twice, this was one of the most entertaining games of the season.

So what? It was fun and they lost. Big deal.

The highlight of the game was this:

Any farther, and we'd be looking for this @Hunter_Renfroe ? in the Gaslamp Quarter! pic.twitter.com/i2gXsALWLW 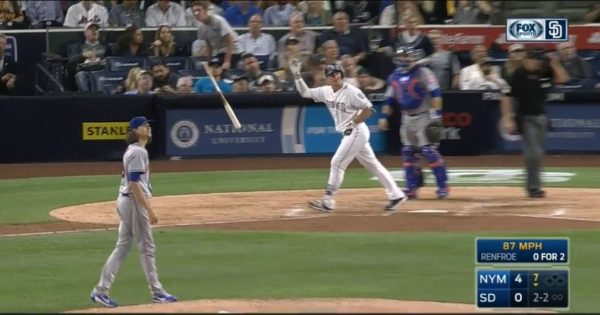 The bat flip was majestic and probably had a launch angle higher than his home run did. It was majestic, glorious, incredible, whatever you want to call it. And it set Twitter on fire. I don’t think anyone would have cared if he made it to third, reversed direction, picked up his bat, and flipped it again. Even non-Padres fans were weighing in on Renfroe’s blast. It was THAT good. In a season like this, those are the moments that are fun. And it was so much fun.

Anyways, on to the bullpen…

With the trade of Ryan Buchter & Brandon Maurer to the Royals, the Padres have lost 77 2/3 innings from their ‘pen, as well as two guys who have appeared in plenty of high-leverage situations this season. If (it seems like “when” would be more suitable after this today) Brad Hand is dealt, the San Diego bullpen will be void of three pitchers who normally work together to close out wins. Where will Andy Green go from here?

Let’s assume Brad Hand is traded. It appears as if the only locks to be in the Padres ‘pen for the rest of 2017 (barring surprise trades, of course) would be Jose Torres, Kirby Yates, Kevin Quackenbush, Phil Maton, and Craig Stammen (after he returns from an ailing hamstring). After that, there’s a lot of question marks. Here are guys who we might see in the next few months:

Hand, Maton, Yates will be up for save chances. Carter Capps also "definitely in the conversation" Green said. Capps has been 88-94 in AAA.

Jose Torres, Kirby Yates, and Phil Maton all are in line to get more experience in high-leverage situations for the rest of 2017. For the first four months of the 2017 season, the bullpen has been the most consistent part of the Padres. That is obviously about to change, and it started tonight. The Padres bullpen is under construction; let’s see what happens.

How about that bat flip though?!