It was a quiet first three innings in El Paso, as right-hander Bryan Rodriguez retired nine of the first ten batters he faced while the Chihuahuas had three hits with no runs over those first three innings. The Chihuahuas finally pushed some runs across in the top of the fourth with a Hunter Renfroe single, a Jose Rondon double, and a Dusty Coleman home run, giving the Chihuahuas a 3-0 lead. The Aces would answer with a run of their own in the bottom of the inning on a solo home run from Christian Walker. Singles by Chase d’Arnaud and Franchy Cordero started off the fifth inning for the Chihuahuas and led to their fourth run of the game.

After quiet fifth and sixth innings for the Aces, they attempted a bit of a comeback in the bottom of the seventh inning. Rodriguez gave up three consecutive singles to start the inning before somehow getting himself out of it with only one run across. Infielder Diego Goris would add two insurance runs for the Chihuahuas in the top of the eighth inning, sealing their 7-2 victory. Chase d’Arnaud had a three-hit night while the Chihuahuas’ bullpen was able to close the door on the Aces with Kevin Quackenbush throwing two scoreless innings. Walker Lockett will take the mound for game three of the series on Friday night in El Paso with a chance to clinch the series.

After losing the opening game of their playoff series against the Midland Rockhounds, the San Antonio Missions bounced back with a 4-3 victory over Midland on Thursday night. Following a quick inning by right-hander Brett Kennedy to start the game, the Missions drew first blood with back-to-back singles by Fernando Tatis Jr. and Luis Urias to start the game, followed by a run scoring double play by Noah Perio. Franmil Reyes followed with yet another single against Rockhounds’ starter James Naile, but Ty France grounded out to Jorge Mateo to end the inning.

The Midland Rockhounds came right back with two second inning doubles to knot the score at one. Despite a couple of singles and a walk, Urias left the bases loaded in the bottom half of the second inning for the Missions. After Midland went down in order in the top of the third, the Missions struck with two runs on three consecutive hits to start the inning; a single by Perio, a double by Franmil Reyes, and an RBI single by France, followed by a double play ball by Nick Torres that plated the second run. The Missions added another run in the fourth inning, followed by a double by Javier Guerra and an RBI single by Luis Urias, a run that would later prove to be the game winner.

Following a fairly easy first four innings, Kennedy ran into some trouble in the fifth inning with three singles plating the second run for the Rockhounds. The Rockhounds plated their third run in the sixth inning on a leadoff home run from Viosergy Rosa, putting the score at 4-3. Kennedy would get the next batter out before being removed from the game for Eric Yardley. Over the final three and two-thirds innings, the Missions relief pitchers threw a shutout, giving up only one hit while striking out six in the process. Yardley, left-hander Brad Wieck, and closer Trey Wingenter were able to shut the door and seal the Missions’ first victory of the series. The series will shift to Midland on Friday in what should be an important game three. Left-hander Joey Lucchesi, who has been arguably the Missions’ best pitcher, will take on right-hander Grant Holmes in that game.

Fort Wayne TinCaps- Won 6-4 (2-0, Advance to Second Round of postseason) 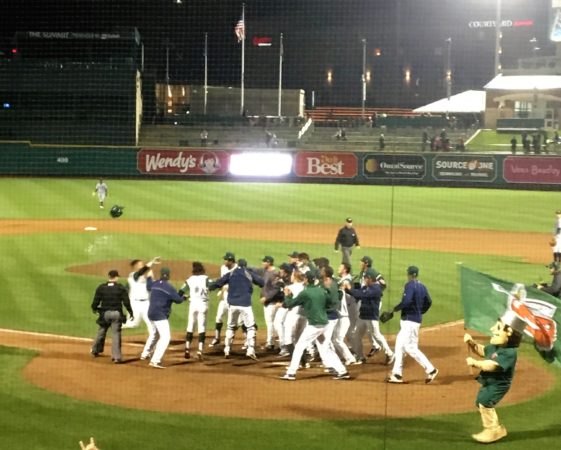 After winning game one of the three-game series against the Bowling Green Hot Rods, the TinCaps wasted no time getting on the board in the bottom of the first inning. In the top of the first, Pedro Avila struck out the side around a single, a stolen base, and a walk, but Jack Suwinski really got the game going with a solo home run to lead off the bottom of the first. Things were fairly quiet until the top of the fourth inning, when the Hot Rods were able to push across their first run of the game. With five strikeouts through the first three innings, Avila was looking solid. However, after giving up a single to start the fourth inning, an error by shortstop Gabriel Arias allowed the Hot Rods to score their first run of the night.

Avila ran into even more trouble in the fifth inning. After two singles and a wild pitch to start the inning, a fielder’s choice infield single loaded the bases against Avila with nobody out. A single plated one run before a groundout plated a second run. With that, Avila’s night was done. In relief, left-hander Osvaldo Hernandez gave up a run-scoring sacrifice fly, the fourth run charged to Avila, before getting the TinCaps out of the inning down 4-1.

In the bottom of the seventh, the TinCaps started chipping away at the Hot Rods’ lead with a double by Reinaldo Ilarraza followed by a passed ball and a sacrifice fly by Jack Suwinski. The TinCaps ended up pushing across two more runs in the bottom of the eighth inning to tie the game, this time on a pair of singles by Marcus Greene Jr. and Jorge Ona, an RBI groundout from Gabriel Arias, and another RBI from Reinaldo Ilarraza. After right-hander Andres Munoz put away the Hot Rods in the top of the ninth, the TinCaps came up to the plate trying to win the game in the bottom of the ninth. After a one-out walk by Hudson Potts, Marcus Greene Jr. stepped up to the plate with two outs and Potts on first. He made that at bat count with a long fly ball to center field that carried over the fence and gave the TinCaps not only the win in the game, but also the series win.

Take a look at @MAGj24‘s walk-off blast for the @TinCaps & see what he had to say after lifting the team to a series sweep over the Hot Rods pic.twitter.com/77SlaIBTCZ

Jose Rondon– SS, Triple-A, El Paso Chihuahuas
2-2, 2 2B, 1 RBI, 1 R
After having a bit of a rough year with regards to injuries and keeping himself on the field, Jose Rondon had to be really looking forward to the playoffs and getting yet another chance to prove himself. At the end of last year, Rondon had a less than stellar big league showing. With there still being no answer to the Padres’ shortstop problem, Rondon is once again looking to put himself at the top of the conversation for Padres shortstop in 2018. No matter what happens in the playoffs for the Chihuahuas, it seems likely that Rondon will once again be a September call-up and will once again find himself with a chance to earn a big league role moving forward.

Bryan Rodriguez– RHP, Triple-A, El Paso Chihuahuas
7 IP, 6 H, 2 ER, 2 BB, 5 K
I just have to mention how gutsy that performance was by Chihuahuas’ right-hander Bryan Rodriguez. After easily cruising through the first six innings against the Reno Aces, Rodriguez ran into some serious trouble in the seventh. With three straight singles to lead off the inning, the Aces had runners on second and third with one run already in. After a walk from Rodriguez, the bases were loaded with nobody out. Rather than remove Rodriguez, Rod Barajas decided to leave Rodriguez in the game. And he did not disappoint. Following a big strikeout and a pop out, Rodriguez collected yet another strikeout to get himself out of a bases loaded jam with only one run across. It would be hard to find a win that was more earned than that one for Rodriguez on Thursday night.

Luis Urias- 2B, Double-A, San Antonio Missions
2-4, 1 RBI
It hasn’t been a great second half for second baseman Luis Urias, but it’s good to see him back on the field and fully healthy. The Padres’ brass are still waiting for him to find some in-game power, power which may never come, but the hit tool is still as good as advertised. Just about every time Urias steps up to the plate he is going to have a great at bat. With himself and Tatis at the top of the Missions’ lineup, San Antonio has as good a chance as anyone to make a deep playoff run in the Texas League.

Brett Kennedy– RHP, Double-A, San Antonio Missions
5.1 IP, 7 H, 3 ER, 1 BB, 4 K
Enyel De Los Santos did not have the best night for the Missions in the first game of their series against the Midland Rockhounds, but Brett Kennedy responded in a big way with yet another strong performance on Thursday night. Kennedy almost never has a flashy stat line, but he consistently gets the job done for the Missions just about every time out. The stuff definitely isn’t overpowering, but it’s hard to argue with those consistent results. Kennedy still isn’t much of a top-flight prospect, but he has certainly earned the talk of him being a potential backend rotation piece at the next level. He still has some work to do to reach that ceiling, but 2017 was a great year for the right-hander.

Marcus Greene Jr.- C, Low-A, Fort Wayne TinCaps
2-4, 1 HR, 2 RBI, 2 R
It was a rather quiet night at the plate for the TinCaps until the eighth inning. The same can be said for catcher Marcus Green Jr., who was 0-2 going into that eighth inning. Not only did Greene single to start off the eighth inning, but he also followed that with a walk-off home run in the bottom of the ninth inning to win the game for the TinCaps. After not gaining much recognition when he was originally acquired from the Texas Rangers in the deal that sent Will Venable to the AL West in 2015, Greene broke out in a big way in 2017, slashing .267/.363/.456 while making great strides behind the plate. He should start next season in Lake Elsinore with a chance to continue to raise his prospect stock.

Pedro Avila– RHP, Low-A, Fort Wayne TinCaps
4.1 IP, 7 H, 4 R (3 ER), 2 BB, 6 K
After an easy first three innings for Avila, in which he struck out five batters total, the right-hander ran into some trouble with an unearned run in the fourth inning and a disastrous fifth inning. Three runs later, Avila’s line was closed, and it was not a great one. However, Avila still looked strong over those first few innings and he did have both his fastball and off-speed pitches working at different times throughout the night. Avila may have had one of the most surprising seasons of any Padres prospect given his struggles in Lake Elsinore and his subsequent dominance of the Midwest League with Fort Wayne. It’s unclear what his ceiling could be moving forward, but he’s definitely greatly improved his stock with his strong second half.

Padres Down on the Farm: May 18 (Mazara homers for EP/Missions throw another combined no-hitter/Dunn 3 hits for LE)

Padres shut down by Wheeler and Phillies, 3-0