The Curious Case of “What the Hell Are those Jerseys?”

There are so many times in life where we say to ourselves, “Wow, I really wish I could have been a fly on the wall for the meeting?”

In this particular case, I really wish I could have been that really annoying fly who kept flying into the faces of whoever brought up these “new” uninspired 2017 home and road uniforms. I know that there are people saying shut up about talking the uniforms and focus on the team and I somewhat agree with that statement, except I haven’t brought up my thoughts on the issue and have already given you 1070 words, a Michael Scott GIF, and a Hunter Renfroe Put It On the Roof Video, so…no…I will not shut up about this, and neither should you!

As I was saying…WHAT ARE THOSE!?!? The owners for some reason love just being navy blue for some reason and cite that most people prefer only the navy blues. My question is…WHO ARE THOSE PEOPLE? I have not come across one person who just wants navy blue. You’re either on the Bring Back the Brown train, the 90’s blue and orange pinstripe train, or the PCL red and blue jersey train (you think I’m kidding).

I personally don’t think I align with any of these trains, except for the fact that I would like the front office to at least acknowledge the fan base in attempt to create a uniform that is unique to San Diego and draws inspiration from our history as a team and as a city. The camo jerseys are great and a good example of that…but these new uniforms have Nordstrom Rack/Target written all over it. 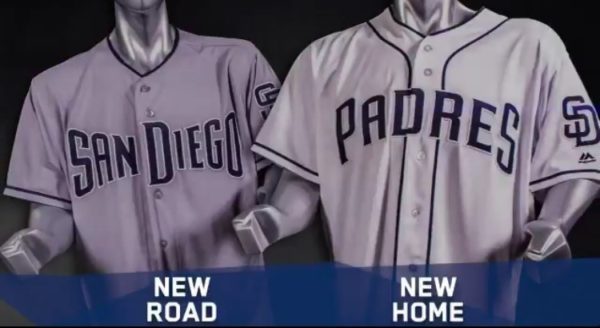 There has been one individual though who has made a considerable effort in willing to compromise with the Padres front office while creating a uniform that is unique to San Diego that draws inspiration from our history as a team and a city. The Twitter handle @BBTB2018, “Bring Back the Brown 2018,” has created a Twitter handle that is dedicated to showcasing how much sense it would be for Padres to finally return back to brown and gold jerseys for their 50th anniversary in 2018. On the handle’s feed, there are clear mockups of how the jerseys would look and the reasoning for why they should return to brown. Below are just a few of the mockups I like and hopefully ownership can take notice of this fine representation from a fan who clearly has dedicated more time into thinking about the identity of the San Diego Padres moving forward than, well, whoever decided THOSE jerseys (^^^) were a good idea.

The Sad Case of Yangervis Solarte

I am a huge Yangervis Solarte fan. At a time when Chase Headley was moping around during walk-off celebrations and just looking like a sad puppy towards the end of his days as a San Diego Padre, there was little excitement or joy in the Padres clubhouse. When Headley was traded to New York for Yangervis Solarte, we all had the same reaction, “Who is Yangervis Solarte?” as we butcher the hell out of his first name. I remember distinctly in Solarte’s first game, I was camping with my family and was listening to the Padres play the Cubs at Wrigley and throughout that series, Solarte was on FIRE. Since he has been in a Padres jersey, he has brought a certain joy and excitement to a city and an organization that was rare.

Hearing of the passing of Juliet Solarte last year was heartbreaking for the entire baseball world, the Padres and the city of San Diego, and myself personally. I was at Soly’s first game back after returning from being with his family and it was chilling to see and hear the city of San Diego stand and applaud for Soly as he stepped to the plate:

Huge standing ovation for @Solarte26 as he steps to the plate to pinch hit in the 7th ?? pic.twitter.com/IKJkqkxd4A

What happened next captured the hearts of everyone at Petco Park and everyone watching back at home:

What an incredibly emotional moment for him, his three beautiful baby daughters, and the rest of his family. Yangervis is a special person and player, and it pains me to say this, but his time on the San Diego Padres has to come to an end. I wouldn’t have it this way and I could maybe write about this on another article, but from the way Preller is moving this organization in a direction that benefits from trading players at their highest, Yangervis has to be the next to go. Whether it be in the remaining days of the offseason or at the trade deadline, Preller will find a way to trade Soly for some great prospects that will contribute to the Padres in the future.

Although on the bright side, Preller is a smart man who knows the value that Solarte has as a player, a teammate, and an athlete that represents San Diego. There will be no low balling A.J. for Soly which could mean that we retain Solarte, which I would love. He is just too good of a player and holds way too much value for another team than what he has on this current 2017 San Diego Padres team. I wanted to write this just in case this was the end of Solarte’s time as a San Diego Padre, I would love to give my thanks and appreciation to a man who has sacrificed so much for his family, his team, and his fans during a time of great pain for him and his family while remaining a joy to watch on the field. He is an inspiration to me as a person and I hope that he finds a way back to the Padres later in his career if he is indeed traded and he can be that veteran presence needed to solidify that future Padres World Series roster. Man, wouldn’t that be sweet?  As a “PS” to this section, here are a couple of GIFs of Solarte (regardless of the ex-Padres in these GIFs) and a picture that I think is one of the best Padres pictures of all time, that show how fantastic Yangervis Solarte is.

Well everyone, thank you for taking the time to read this post of mine. I really wanted to get a lot of subjects that I was curious about out on the table and hopefully we can discuss it further. Feel free to find me on Twitter at @JusticeParman and just hit me up and feel free to talk Padres with me anytime.

Next week, I’ll be at least covering: