The San Diego Padres are developing talent at an unusually high rate.

Well, at least unusual for them, as they presently have a group of players that are just about ready for major league service time. Hunter Renfroe, Manuel Margot, Austin Hedges, and Carlos Asuaje are just the beginning. They are the first wave of talent that will continuously pound the shores of San Diego.

Not far behind them is a group of pitchers led by Michael Kelly, Dinelson Lamet, Jose Torres, Phil Maton, and Kyle McGrath. That group could very well see some playing time with the Padres this season, and yet another name to add to that list is talented young left-handed pitcher, Brad Wieck.

The native Texan is big in stature, as he stands six-foot nine on the mound. He can be intimidating toeing the rubber, as his attitude matches his size. Brad loves to compete and rarely comes at an opponent softly. He goes right after hitters and attacks them relentlessly. That is nice to see from a young pitcher.

The left-handed hurler had an outstanding year last year in his first season as a reliever and is making major strides with his stuff. He made it to Double-A San Antonio in 2016, after starting in Lake Elsinore. His numbers improved in San Antonio, where he went 1-0 with a 0.44 ERA and a 0.885 WHIP in 15 games and 20 innings pitched. That after going 3-1 with a 1.54 ERA in Lake Elsinore. He struck out 93 batters in 61 innings pitched this past year while only allowing 44 total hits. This young man is effective and it is only a matter of time before he is given his shot at major league service time.

I recently sat down with Brad and caught up with him on his first full season in the Padres’ organization. Here is a taste of what we discussed, as both he and I are extremely excited for the start of the 2017 season. 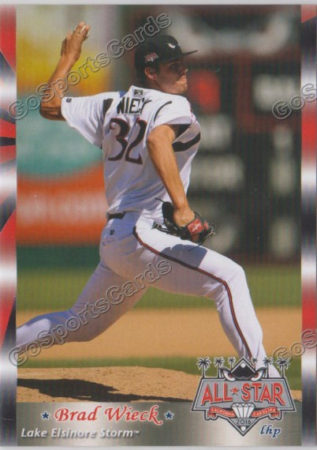 Brad was not part of the Future’s Games in November as he was participating in the AZL Fall League. I asked him his thoughts on the Arizona league and how it helped him as a pitcher. “The Fall League was awesome. It was pretty cool to go out there and face players that are of a higher caliber. One through nine in the lineup can do damage to you. The caliber of baseball in the Fall League was something I had not experienced before, and it was definitely awesome. It makes you a better ball player. You start playing with that type of caliber talent and you have to get better.” The Padres showed a lot of confidence in him by sending him to this league. That bodes well for his future with the team.

We next discussed the fact that Brad pitched solely out of the pen during the 2016 season and failed to get one start. This after making 23 starts and throwing 123 innings in 2015 between the Mets’ and Padres’ systems. Earlier in the 2016 season, I spoke to Brad about possibly relieving, and he just wanted to pitch. He didn’t care in what capacity. He has those same sentiments now and that is what makes him valuable to the Padres. The man just wants to go out there and play ball.

“When I first got drafted out of college, I’d already thrown a lot, so for my short season (in 2014 for the Mets) I only came out of the pen. I had success there, and granted, I was facing a lot of younger guys, but I pitched well. I always knew I had that in my back pocket. When I started in 2015, I saw what a toll it takes on your body. Later on in the season you are a little more worn down as a starter, than as a reliever.”

I asked how his arm responded to the more frequent work, and he response was typical. “My recovery time and everything went down. All was well out of the pen for my arm. I enjoyed my time in the bullpen.” Wieck is a big body on the mound, but he is not a fireball pitcher by any means. As a starter he was sitting in the low 90’s with his velocity. He now has a little more giddy-up on his fastball pitching as a reliever. His game is more about aggressiveness and attacking hitters fearlessly while intimidating hitters with his dominating presence. Don’t get me wrong, 95 from a pitcher of his size is surely enough to get on top of most hitters.

Pitching coach Glendon Rusch has been a big influence on Wieck and he talked a little bit about the former major leaguer. “Having someone who had success at that level and also being left-handed was huge. Ruschy is a great coach. He worked with me on why I was throwing the type of pitches I was, in certain counts. He taught me about the mental side of the game. Maybe one day he will be my pitching coach again.” Rusch will probably stay in Lake Elsinore for now, but Wieck’s time in the California league is over. He is on to better and brighter things.

Padres Down on the Farm: May 5 (Storm/TinCaps win, Missions lose)

Padres Down on the Farm: May 4 (TinCaps, Missions and Storm all debut with wins)

Padres top performers of the week: April 26-May 2

Padres Down on the Farm: May 5 (Storm/TinCaps win, Missions lose)

Padres Down on the Farm: May 4 (TinCaps, Missions and Storm all debut with wins)