Their inaugural ranking is at No.24.

These CFP rankings are actually meaningful to end of the season selections, unlike the AP Poll rankings that football fans are used to seeing and were used to start the season.

Before Saturday, the Aztecs were undefeated and ranked in the AP Poll for their 7-0 start.

When the rankings were revealed from bottom to top, it was surprising to see the Aztecs ranked. However, the committee revealed that Fresno State is their 23rd ranked team, meaning that the committee did not view SDSU’s loss on Saturday in a negative way.

None of the other teams on the Aztecs’ schedule were in the original rankings. It is reasonable to assume that the 5-3 Utah Utes, whom the Aztecs beat on September 18, is somewhat close to being ranked. If the Utes continue to win, it will also improve the Aztecs’ resume. 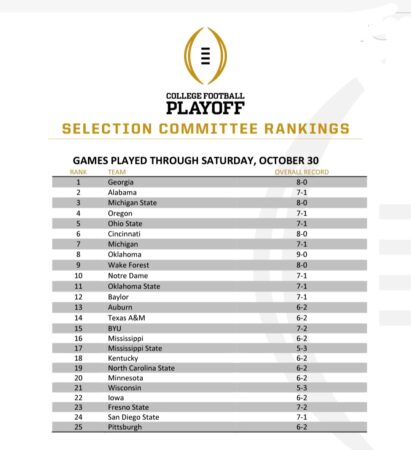 San Diego State is the fourth-highest group-of-five conference team in the rankings, trailing Fresno State, 15th ranked BYU(Independent), and 6th ranked Cincinnati(American). The highest-ranked group-of-five team receives an automatic bid to a New Year’s Six bowl games, which is the biggest bowl games and a goal of the San Diego State program.

If the Aztecs suffer another loss, they will likely never make it back in the CFP rankings, as they are already on the bottom of the rankings and would lose to an unranked team.

Their hope to make a New Year’s Six Bowl is to win their last four regular-season games, one more Fresno State loss to put the Aztecs back in the Mountain West Conference championship game, a strong ending to the season from Utah, and a rough conclusion of the season for both Cincinnati and BYU.

San Diego State travel to play against the Hawaii Rainbow Warriors on Saturday.