Uto-Aztecan is the name of the language family that includes Nahuatl, the language of the Aztecs, and Hohokam, the language and name of the people that first lived in the city of Phoenix, Arizona. The most enduring monument to the Hohokam culture is the village of Pueblo Grande.

Located about five miles from the Footprint Center where SDSU played Saturday afternoon, the Pueblo Grande ruins give evidence to a people that survived in the Arizonan desert for thousands of years before the Spanish arrived in the area. To sustain their population, the Hohokam built the most elaborate irrigation systems in the New World north of Peru. 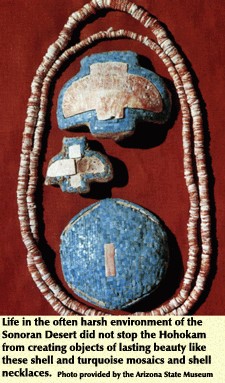 Engineered to gradually slope downward from nearby rivers, the Hohokam’ canals stretched for miles with some 45 feet wide and 15 feet deep. All totaled, they irrigated more than 100,000 acres making an inhospitable environment suitable for human civilization. Through ingenuity, they moved past subsistence farming, creating an economy that supported the mining of turquoise used by artists to create decorations and jewelry that has survived into the present.

As part of its celebration of Native American Heritage Month in 2014, SDSU collaborated with Nike N7 to create one of the more unique outfits in college basketball. Fittingly, for the first time ever, the Aztecs chose to wear their turquoise Nike N7 kits away from San Diego. Whenever they suit up in the uniforms, it is to remember the deep Native American heritage in the region. The Hohokam are certainly worthy of that honor.

Saturday’s contest was the tenth time SDSU had donned the Nike N7s. They were undefeated coming in when wearing them. They did not prove lucky yet again as Saint Mary’s took down the Aztecs 68-61.

“You got to shoot better, and we’ve got to finish better around the basket,” SDSU assistant coach Chris Acker said postgame. “Credit to Saint Mary’s for making every finish tough and contesting all of our shots. They knew last time we played them, Adam Seiko got going. I think he hit four threes in the last game, so they did a great job not letting him get a touch. Other guys have to step up and make shots, and we didn’t do that tonight.”

Brian Dutcher began with his normal starters. The story of the game early for the Red and Black was offensive rebounding. Against one of the top defenses in America that held top-ranked Houston to 53 points, SDSU had multiple stretches where scoring field goals was a challenge. Following a layup by Lamont Butler with 17:26 left in the first half, the Aztecs’ next field goal in the flow of their offense occurred at the 12:29 mark. In between, they had three baskets from offensive rebounds.

Once Saint Mary’s was able to control the glass and limit the Aztecs to one possession, they opened up a nine-point lead with a little over five and a half minutes left in the first half. The Gaels dominated for stretches offensively with the dribble-drive, either by scoring tough baskets after blowing by a defender or kicking to wide-open teammates for threes on the perimeter.

Saint Mary’s was led at the half by 6’7 senior forward Alex Ducas’ 14 points and senior guard Logan Johnson’s eight. As is normal for the Gaels, all but three points of their 35 points were scored by their starters. They led for 13:11 minutes of the opening frame scoring on 16 of their 31 possession.

With 3:41 remaining, following a three by Saint Mary’s, SDSU trailed 33-25. They ended the half on an 11-2 run. Lamont Butler was a menace. He earned seven trips to the foul line in the first half and made five during the stretch that narrowed the score. On what appeared to be the Aztecs’ last possession of the first half, Keshad Johnson drove to his right for a strong layup to bring the gap to three.

Playing for the final shot, Saint Mary’s dribbled down the clock before freshman Josh Johnson missed a rushed three in front of SDSU’s bench. Jaedon LeDee came down with the rebound, moved towards half-court, and looked like he was about to attempt a heavy at the basket prompting a Gael’s defender to elevate to block the attempt. LeDee lobbed it instead to Micah Parrish. Parrish planted two feet with one on the half-court line near the scorers’ table. The ball hit off the backboard and went in to tie the game.

Butler paced the Aztecs with nine points at the half. Darrion Trammell had seven. They shot 50% from the field but only 28.6% from three, even including Parrish’s half-court hoist. SDSU had nine second-chance points.

Coming out of the locker room Nathan Mensah scored on a right-handed layup but picked up his third foul on the ensuing possession forcing him to the bench. At 12:41 left, he racked up his fourth. With Mensah on the bench, Saint Mary’s size took advantage in the first ten minutes opening up a five-point lead at the ten-minute mark left in the contest.

“(Mensah) just has to better,” Acker said. “He has to be smarter and put himself in better situations and positions to not foul. We talked a lot about that going into the game of doing a good job and not putting himself into situations where he’s going to foul. (Saint Mary’s) came out and attacked him, and when opportunities presented themselves when he wasn’t in the right position, they got the foul call.”

SDSU had multiple chances to narrow the lead but could not convert contested layups. The Aztecs were down 56-50 with 5:50 remaining when Mensah returned. He checked in on the defensive end, and Ducas hit a three, which prompted a timeout by Brian Dutcher.

Down nine with 5:30 left in the game, Dutcher dialed up a fake ball screen that resulted in a lay-up for Aguek Arop. Two possessions later, Butler narrowed the lead to five. He went for a dunk but was met and fouled. He still had enough touch to make the basket prompting the under-four-minute television timeout. When the game resumed, SDSU’s guard missed the free throw, and the lead was five with 3:30 left.

Another slipped screen by Arop brought the Aztecs to three. SDSU’s best chance to win the game late was when Senior Forward Kyle Bowne fouled out on a loose ball where he bumped Trammell out-of-bounds and was called for a foul. Not only did it disqualify a starter from the game, but it also gave the SDSU guard a chance to bring the game within one without taking time off the clock. Trammell did not take advantage of the opportunity and missed the front end of the one-and-one.

On the ensuing possession, Mensah fouled out because he over-played his man on the pass. Instead, center Michael Saxen drove and made a lay-up with contact. He missed the free throw leaving Saint Mary’s up 61-56 with 1:47 remaining.

The teams exchanged foul shots, and Saint Mary’s led by five with 61 seconds left. Dutcher elected to pick up full-court pressure, creating a turnover, but it was too little too late. SDSU had multiple three-point attempts but failed to convert to really pressure the Gaels at the end of the contest. The last real opportunity for a dramatic finish was with 45 seconds left, but Trammell could not get the ball in-bounds and was called for a five-second count.

As has been the case since the Maui Invitational, SDSU has struggled to assist each other on offense. They finished the game with only 11 assists, though eight of those came in the second half. The Aztecs only shot 33% over the final 20 minutes and were 1-8 from three. Defensively, the Gaels attacked Trammell frequently, and they were able to shoot 49% from the field. In 30 minutes, Matt Bradley scored 13 points to lead the Aztecs, but he was a poor 4-13 from the field. Keshad Johnson had an efficient 12 but was only on the court for 20 minutes.

Translated into English, Hohokam means “exhausted.” As a symbol for water, turquoise played a prominent role in Hohokam art because it was their most scarce resource, and wherever it flowed, it brought refreshment to a people who thrived because of their intense labor in the Arizona desert.

Given the strength of its non-conference schedule, the illnesses its players have had, and the end of the college semester, “exhausted” could be used to describe SDSU. As they depart the ancient home of the Native Americans they honored today by wearing their Turquoise Nike N7 kits after suffering a 68-61 and dropping to 7-3 on the season, the Aztecs hope to find renewed purpose and energy for the final two contests of the non-conference schedule including Monday’s matchup against Kennesaw State at 7 pm.

My earliest sport's memory involve tailgating at the Murph, running down the circular exit ramps, and seeing the Padres, Chargers and Aztecs play. As a second generation Aztec, I am passionate about all things SDSU. Other interests include raising my four children, being a great husband and teaching high school.
Tags: Aztecs, Nathan Mensah, SDSU