Ever since the Padres traded for Yangervis Solarte in 2014, he has provided stability to an organization that has anything but that.

In 3+ seasons as a Padre, he has hit .274/.334/.427 with 43 home runs while spending time at second, short, and third. Over that time, he has accumulated a nice 6.9 WAR. If one had to describe Yangervis Solarte on the field, it would probably be this: rock-solid.

Solarte started off the 2017 season slow, but has picked it up as of late. Before injuring his oblique during batting practice on Tuesday, Solarte was on fire in June, slugging .667 with seven home runs in 17 games en route to a 174 wRC+. We are approaching trade season and Solarte was already rumored to be a lock to be moved even before the hot streak, so naturally there is a ton of conversation about where Yangervis Solarte may be playing come August. As someone who is versatile defensively, a switch hitter, and under control through 2019, there is good reason to think that Solarte could contribute to and help a contending team.

Trading Yangervis Solarte is the proper “baseball” move. His body of work, both on the field and off, will bring back an interesting prospect or two in return… which is exactly what the Padres need. They should look to add talent to their system in any way possible, and trading Solarte does exactly that.

That being said, if he is traded, Padres fans will miss him dearly. Which is why I have decided to write a little tribute showing my appreciation for Yangervis Solarte.

So, here it goes…

Yangervis represents everything that is great about baseball. If the Padres had a “Solarte cam” during games, I would watch. He always seems to be up to something during games; chatting it up with his teammates, dancing, yelling, laughing, talking to opposing players, or whatever else. The grind of going through 162 games on a team like the Padres cannot be easy for some guys. For Solarte, though, it seems easy. He gets up for every game, every at bat. Even during random games in August when the Padres are 25 games out of first place, he’s still laughing, bat flipping, and chatting it up. In his 3+ seasons in San Diego, absolutely nothing bad has ever been said about the guy. With the Padres, he has been through ups and downs, triumph and tragedy. Yet he is always so upbeat, so joyous. As a fan, you can’t help but gravitate to a player, to a HUMAN, like that.

The thing about Solarte is that he is even a better human than he is a ballplayer. The passing of his wife last year was unfathomable. For that to happen to a guy like him… life just is not fair. I could not even imagine what he felt then, and still feels now. His famed “alligator clap”- his home run celebration- was inspired by his family. He won MLB’s 2016 Tony Conigliaro award, which is given to “the Major Leaguer who has overcome adversity through the attributes of spirit, determination and courage that were trademarks of Tony C.” He constantly speaks about his daughters and how he does everything for them and his late wife. His daughters recently made the trip with him to Milwaukee and Chicago. In the four games he played, he hit a total of four home runs. On one, a go-ahead shot in the 10th, he pointed to his daughters after touching home:

He has the attitude every ballplayer should have. He has fun. He bat flips & pimps home runs. He wears his emotions on his sleeve, but does not take the game too seriously. His attitude is infectious, too. It is hard to describe… but Yangervis just makes us feel good. Watching him play baseball makes us feel like everything is okay in the world and takes our minds away from real life, if only for a brief moment. I don’t know why, but he has that effect (on me at least). A lot of players (even superstars in baseball) don’t have that quality, but he does. He really is the heart and the soul of the San Diego Padres. As someone who loves baseball, I feel fortunate to have spent many days watching Yangervis Solarte play for my favorite team.

Solarte is the best ? pic.twitter.com/Pfq53R4HfZ

For your dance moves:

How @Solarte26 likes to stretch before the game. This is why Solie is the best ? @MLBNetwork @Padres pic.twitter.com/4P5LHIxi6T

For your bat drops:

For putting your body on the line & catching nacho cheese and hats in the process: 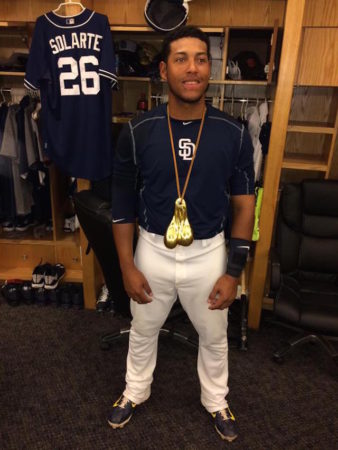 Yangervis Solarte deserves to play on a contending team. Given his oblique injury isn’t too serious, he should be back in time to prove to teams he is healthy and 100%. Whether he stays or goes, all Padres fans should be rooting for him to succeed both on and off the diamond.

Baseball is fun. College sophomore that is aspiring to work someday in the sports industry. Follow me on twitter @Friar_Faithful. Go Pads!