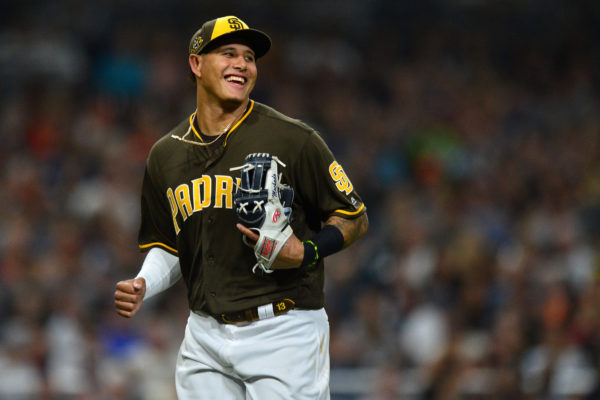 Plain and simple- if the San Diego Padres trade Manny Machado, it will send a horrible message to the fan base.

A little bit of an uproar hit Padres’ social media on Friday. A report coming from the Athletic (Ken Rosenthal and Eno Sarris) indicates that some rival executives believe the San Diego Padres should move Manny Machado as the Colorado Rockies did with third baseman Nolan Arenado this past winter.

The logic is that it would provide some financial flexibility for the Padres moving forward.

This is all just talk, but some have lost their mind over these last few lines in this well-written piece. This information is not coming from the Padres. It is pure speculation from an outsider’s point of view. Speculation is just that. But it does raise a question.

Would the Padres ever consider dealing their cornerstone third baseman?

Manny Machado will be 30 next season, but there is still a lot of life to his game. The third baseman is one of the best in the game with the glove. Machado is also durable and productive, with the bat in the middle of the lineup. He is not just a good player. Machado is great. His contract signifies that. An excess of $300 million to one player is a significant investment, but Machado is proving to be worth the salary. At least so far.

Any potential trade talk is way premature at this point. Yes, the Padres need some financial flexibility for the 2022 season. There are other ways for the club to save some money without thinking about moving Machado. Removing Wil Myers of Eric Hosmer‘s contract is not an easy task, but surely not impossible. If the Padres have to package prospects with either player to gain financial flexibility- then so be it. A.J. Preller is creative when it comes to transactions.

The fans of the Padres have endured so much over their lifetime. From fire sales to poor attempts to compete- this is a battered bunch. Padres fans are at the point where there is a sense of pride about the team. Wearing a brown ballcap around town is a popular thing to do. Unlike no other time, Padres fans are popping up from out of nowhere. Fans that have never stepped foot in San Diego. The revitalization of the San Diego Padres must move forward.

If the Padres want to continue this wake-up call to the national baseball fans, then they cannot fall back into old ways. The Padres drew almost 2.2 million fans to Petco Park this season. As far as road games go, the Padres averaged 21,706 fans which was the fourth-best in all of baseball. Only the Dodgers, Giants, and Cubs drew more fans on the road than the Padres. In the modern game of baseball, it takes money to make money. The ownership group is being rewarded for investing in the roster. Machado is part of that investment, and he should not be dealt to gain a few bucks.