Cory Spangenberg was selected by the San Diego Padres in the first round (10th overall) of the 2011 draft, out of Indian River State College.

The Padres envision him as a second baseman with some pop. Someone who could potentially hit for a high average, while providing stellar defense. The ability with the glove is there, although he has moved all around the diamond. Recently, Spangenberg has played often in left field for manager Andy Green. Playing the outfield was something that he needed to get accustomed to initially, but Spangenberg has looked very comfortable in recent games.

In 2015, Spangenberg received the majority of his major league service time. In 108 games and 303 at bats, he recorded a .271/.333/.399 batting line. He stole nine bases for the club, and recorded a respectable 2.1 WAR for the Padres. He looked to be on the verge of a breakout, but a nasty leg injury sidelined him for virtually the whole 2016 season. He only played in 14 games and recorded 48 at bats last year.

With his injury, the Padres found Ryan Schimpf, who hit 20 homers in 89 games for the Friars in 2016, seemingly out of nowhere. As spring training began in 2017, everyone was well aware of the battle between Schimpf and Spangenberg for playing time and a roster spot. A battle that was eventually won by the power hitting Schimpf, as Spangenberg was optioned to Triple-A El Paso to begin the year. The move was a bit of a surprise.

More often than not, a player has to hit the bottom before they can reach their potential…not that going back to the minor at the age of 26 is a bad thing. Still, some players would have taken such a move and lost confidence. Some players never recover from a demotion and simply never gain that edge in their game again. You have to hand it to Spangenberg, as he went to El Paso and tore it up. He put up a .348/.403/.470 batting line in 17 games and 66 at bats.

When Travis Jankowski went down with an injured foot, he was given the opportunity to play often and help fill the void. He has been in the starting lineup for 12 of the last 13 games, but has yet to take advantage of the situation and really produce.

Taking a look at his numbers, you will see some changes that need to be made with his approach at the plate. He has always had a high strikeout rate. It remains to be seen if that will ever change, but even if it doesn’t there is no reason why he can’t be a really effective major league player. Still, an adjustment needs to be made.

3.4 is his career strikeout/walk rate. For being a speed oriented player, he does not walk as much as he probably should. However, if you maintain a high average, and put the ball in play, walks are not ideal to evaluate a players worth. 8.33 is his current strikeout/walk rate in the 2017 season (102 at bats, 27 strikeouts/four walks), and that will simply not cut it.

There is another issue, as he constantly hits the ball on the ground. Ted Williams was often quoted as saying good things happen when you hit the ball in the air. Spangenberg doesn’t need to drive the ball into the outfield, as he will never be a prodigious power hitter, but he does need to produce more line drives from his swing. By getting some lift in your hits, the ball will have a better chance to clear a defender.

Simply using a little more top-hand (while tinkering with launch angle) with his swing, could be an effective adjustment for Spangenberg. By doing this, he can slash line drives all over the field, instead of ground balls. In the modern game of baseball, managers have so much information on a hitter that they can appropriately place a defender in the correct position to field a ground ball. Base hits are not coming on the ground for Spangenberg. It’s time to adjust.

Here are his at bats this season and the result. It’s early, but clearly he puts the ball on the ground often. 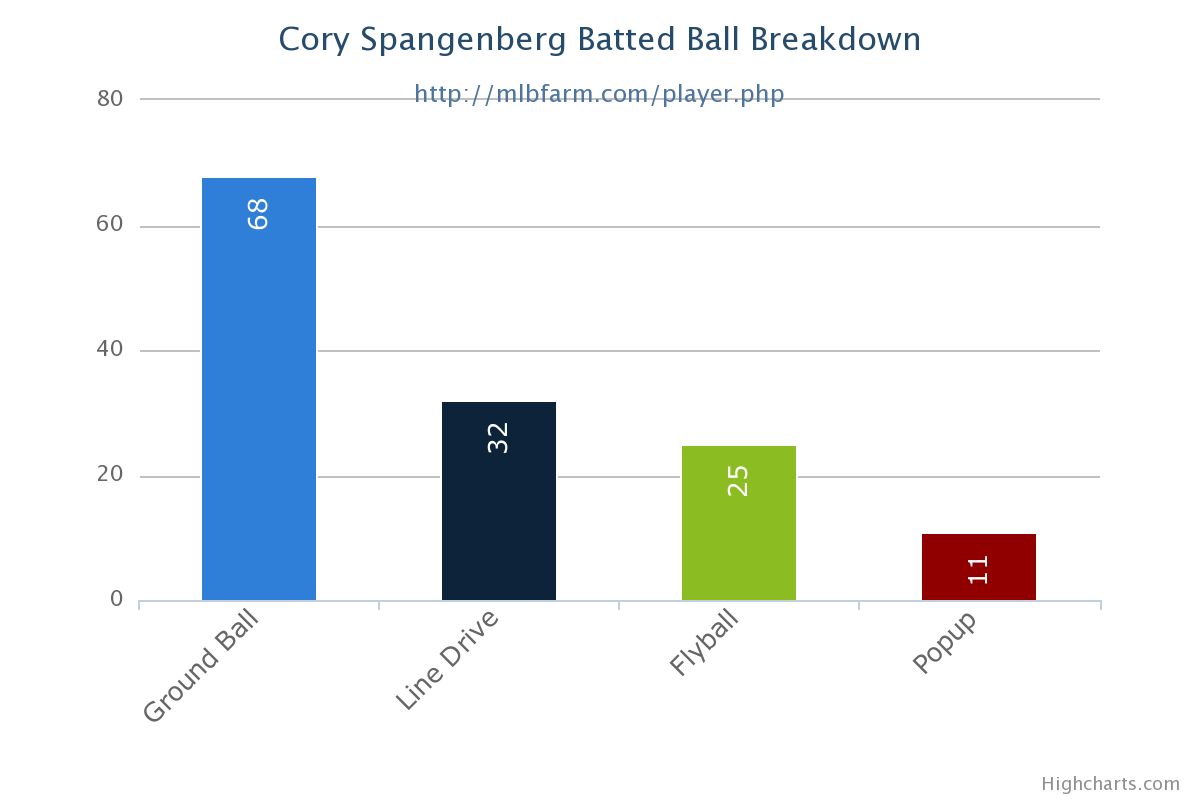 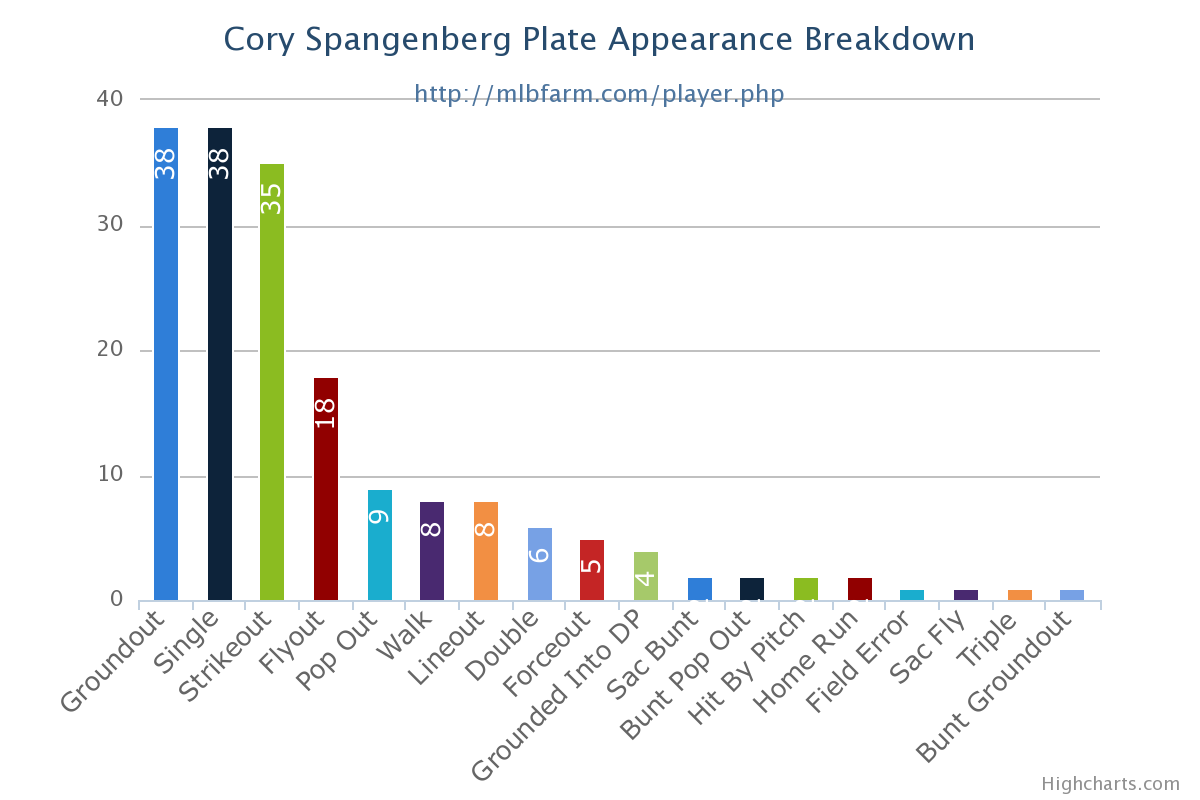 Cory Spangenberg is always geared for a fastball. More often than not, he is a victim of the strikeout, by chasing a breaking ball off the plate in the dirt…one that he recognizes as a fastball and pulls off of. Hitting the fastball has brought Spangenberg to the majors, but he needs to adjust in order to get the most out of his time here. Taking a look at the chart below from BrooksBaseball.net shows you that, with two strikes, Spangenberg is whiffing on sliders 26.09 % of the time. He is also swinging and missing on curveballs at a 26.67 % clip and cutters at a 20 % rate. Meanwhile, only 8.33 % of the time is he missing a four-seam fastball with two strikes and he is only missing sinkers at a 5.88 % rate.

In any count, he is still whiffing at sliders at a 21.43% rate, while handling fastballs with ease. The book is out on young Spangenberg, and it’s not to give him a fastball when you are ahead in the count. He is either going to have to learn to hit the sliders and hard cutters, or he is going to have to learn to recognize them and lay off of them. Not an easy task by any means. Hard, biting sliders are almost impossible to recognize out of a pitcher’s hand.

With two strikes, you cannot tell a player to look for a breaking pitch. That would be suicide. However, the Padres can advise him to go up the middle, and the other way, with two strikes. Even with a fastball. By staying on a pitch longer and attempting to hit it up the middle he can recognize breaking pitches in the dirt and lay off of them. Just a thought. Again, easier said than done. Swinging and timing fastballs has gotten Spangenberg to where he is. Altering that approach slightly will be a tall order for this young man. 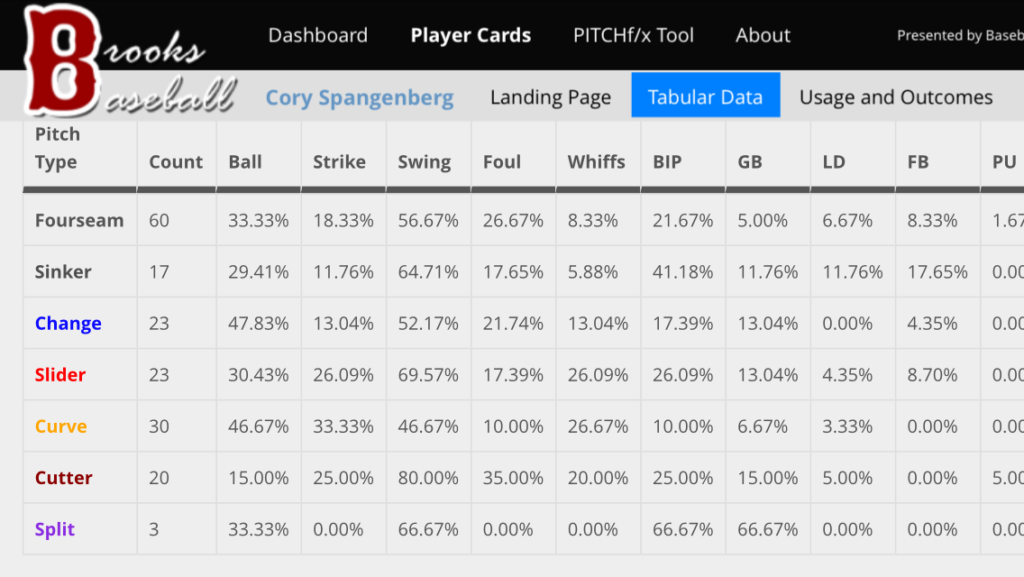 Taking a look at some more of Spangenberg’s analytical numbers, you see that his launch angle is slightly above the MLB average of 13.01. His current angle of 14.30 is above average, yet he fails to square the ball more often than not. By topping balls in the dirt and being ahead of off-speed pitches, his average exit velocity is down to 85.8 MPH. The average in the league thus far is 87.8 MPH. If he can drive the ball more effectively, his batted ball velocity will surely increase. At this point, you have to utilize every advantage you have when you are playing the game of baseball. Using advanced stats like these and implementing them into your swing could be a pivotal moment in a player’s life.

Cory Spangenberg can hit the fastball. We all know that. There are very few pitchers who can just throw it by him. However, he tends to start his swing early and pull the ball. If he can recognize spin better and lay off breaking pitches in the dirt, his numbers should improve. Sliders and hard curves have been a thorn in his side, but he is still very young and can make the changes necessary for growth. A few less ground balls and more pitch recognition from the left-handed hitter, and the Padres could very well have their second baseman for a long time. The ability is there. Now it’s time to make the adjustments.