In yet another deal with the Tampa Bay Rays, the San Diego Padres acquired Emilio Pagan in exchange for Manuel Margot and Logan Driscoll.

If trading with the Rays can be likened unto playing with fire, Padres’ general manager A.J. Preller is something of a pyromaniac.

It’s not entirely clear what the Rays plan to do with Manuel Margot, who is essentially a clone of Kevin Kiermaier – an elite defensive center fielder who hits lefties well but is not good against right-handed pitching, to put it politely.

Driscoll is an interesting prospect, a college bat who hit well in his professional debut but is still quite a ways away from the majors.

An entire article could (and surely will) be written about the motivation of both teams to execute this deal. Still, we’re going to focus on what the Padres are getting in Emilio Pagan, who was one of the best relievers in baseball in 2019.

Before we dive into the details, first enjoy this GIF of Pagan making George Springer look absolutely silly with a nasty 88 mph cutter:

Pagan is 28 years old and first broke into the majors during the 2017 season with the Seattle Mariners, who selected him in the 10th round of the 2013 MLB draft. He was a reliable reliever for Seattle as a rookie in 2017, posting a 3.22 ERA/3.28 FIP/4.08 xFIP line. This was aided considerably by home run suppression, as Pagan carried a 9.5% HR/FB rate, well below league-average. After the 2017 season, Pagan and minor-leaguer Alexander Campos were traded to the Oakland Athletics for first basemen Ryon Healy.

Pagan’s 2018 season was a bit of a disappointment, as he pitched to a 4.35 ERA/4.92 FIP/4.75xFIP line across 62 innings. His pitch repertoire didn’t change much in 2017, but he started throwing his fastball lower in the zone, as his average fastball height was 2.5 feet, after throwing it at an average height of 2.7 feet in 2017. That may not sound like a lot, but it’s often the difference between a swing-and-miss or weak contact, and a hard-hit ball. The Rays most certainly noticed this distinction, and it’s possible that this was a factor in their decision to acquire him in a three-team deal with Oakland and the Texas Rangers.

Pagan is an extreme fly ball pitcher, so his results can be significantly influenced by his HR/FB rate. That being said, fly ball-heavy relievers can be quite successful, and Pagan doesn’t give up too much hard contact.  Pagan’s career fly ball rate of 52.7% is very similar to that of Josh Hader, who carries a 51.6% fly-ball rate, and playing 81 games in Petco Park each year certainly won’t hurt Pagan in this regard.

The Rays changed Pagan’s entire approach in 2019, and, to the surprise of virtually no one, the results were fantastic. Pagan’s changeup and rarely-used sinker were eliminated entirely, and he threw either his four-seamer or his cutter 98% of the time, increasing his cutter usage by 7% and occasionally mixing in a curveball as well. Pagan’s fastball has always had a ton of movement – averaging between 18-21 inches of rise each year in his career per Baseball Savant. But his four-seamer velocity ticked up quite a bit in 2019, increasing from an average of 93.8 mph in 2018 to 95.5 mph in 2019, and he got a massive 10.2% increase in his whiff rate on four-seamers as a result. And it wasn’t just the fastball that got a velocity boost, he gained an average of 2.5 mph on his cutter in 2019 at the expense of sacrificing some movement.

It’s not entirely clear what the Pagan and the Rays did to achieve the increase in fastball velocity. Still, Pagan’s newfound weapons not only increased his success in getting swings-and-misses, but hitters also struggled mightily against Pagan even when they actually made contact. But don’t take my word for it, here’s a look at his career strikeout and walk rates, and his xwOBA-allowed (quality of contact based on exit velocity and launch angle): 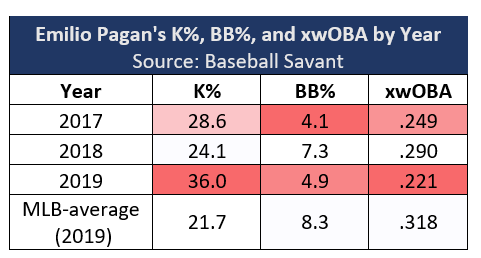 Pagan has been above-average in each of these categories for his entire MLB career, but in 2019 he was in the 93rd percentile (or better) in each category. As expected, his strikeout rate saw a massive increase, while his walk rate actually decreased from the previous season. This combination of whiffs, control, and ability to limit optimal contact allowed him to finish the season with a career-best 2.31 ERA/3.30 FIP/3.15xFIP. That his xFIP is lower than his FIP tells us that he wasn’t relying on homer suppression to achieve these results. In fact, his HR/FB rate of 16.4% could see some positive regression in 2020, especially if the juiced ball is less juiced.

Whether or not Pagan has another monster season in 2020 is mainly going to depend on two things: velocity and fastball location. Assuming his improved velocity holds up in 2020, Pagan should continue to get a ton of swing-and-miss. While xwOBA isn’t a very good predictive descriptor for pitchers, xFIP generally is, and his 3.15 mark in 2019 was quite good. The Rays had Pagan throw his fastball up in the zone more often than he did in Oakland, and the Padres would be wise to follow this approach as well. Check out Pagan’s zone swing profiles on four-seamers from 2018 and 2019: 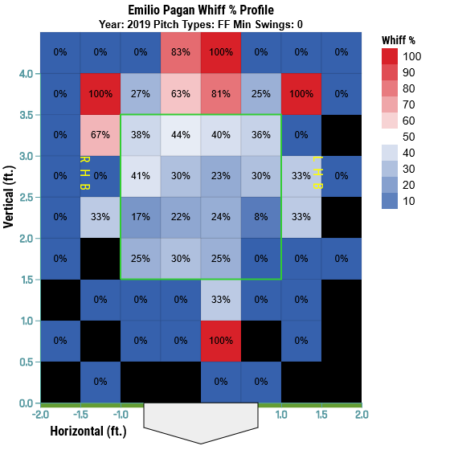 It’s clear that the Rays’ strategy of pumping fastballs into the upper portion of the strike zone to get whiffs was wildly effective. In fact, his improved velocity didn’t really help his whiff rates lower in the strike zone in 2019. This strategy isn’t unique to the Rays, as we’ve seen it being utilized more frequently throughout the majors, and with the data that we (and surely the Padres’ front office) have seen, there’s really no reason for Pagan to change the way he used his four-seamer in 2019.

If there is one cause for concern, it’s that the Rays utilized Pagan in a manner that played to his strengths (as they tend to do), and it’s possible that this propped up his results a bit. Like most pitchers, Pagan has fairly strong platoon splits, allowing a .292 wOBA to left-handed hitters in 2019, while righties posted a minuscule .218 wOBA against him. Pagan faced 171 right-handed batters in 2019 while facing only 96 lefties. The Rays made a habit of setting him up for success by regularly bringing him in to relieve a left-handed pitcher in the middle of an inning when multiple right-handed hitters were due up.

The only problem with this, of course, is that MLB’s new three-batter minimum will take effect in 2020, so the Padres typically won’t be able to utilize him in this manner. That doesn’t mean that Tingler can’t set him for success by bringing him into the game when the opponent has multiple righties due up. Still, it does mean that merely using Pagan (and others) as a normal 7-8-9 combination may not be the best option to get the most out of the Padres’ relief corps. It remains to be seen how Jayce Tingler will choose to manage his stacked bullpen, but there’s no doubt that Pagan will be yet another excellent weapon at his disposal in 2020 and beyond.

All stats are courtesy of Fangraphs unless otherwise noted.

Holden Phillips is an Occupational Exposure Scientist who also happens to write about baseball, primarily focusing on analytics. He is a huge baseball fan and fell in love with the Padres during his college years when West Coast baseball was often the only baseball on TV after 9pm in the Eastern time zone. Find his work at eastvillagetimes.com and maxsportingstudio.com.
Tags: Emilio Pagan, Padres 2020, Padres Bullpen, Padres Emilio Pagan, Padres MLB, Pagan Padres, San Diego Padres

1 thought on “A deeper look at Emilio Pagan, the newest weapon for the San Diego Padres”