Adam Frazier is now a member of the San Diego Padres, and the Friars should be excited with the skillset they acquired.

For anyone who likes throwback players, new Padres second baseman/outfielder Adam Frazier is your guy. Padres fans, more than perhaps any other fan base, should appreciate his skillset and approach given that San Diego boasts one of the best pure contact hitters to ever live in one Tony Gwynn.

Not that Frazier will make anyone (especially in San Diego) forget about Mr. Padre any time soon, but the approach and mentality is from the same vein.

First off, Frazier simply does not strikeout. Since 2019, Frazier is 10th-best in strikeout rate. He bumps up to seventh on that list in 2021 alone. Per Baseball Savant, his whiff rate is in the 98th percentile. Meaning, very, very few players swing and miss less than Frazier.

It doesn’t take a baseball genius to understand why having a hitter in the lineup who is among the toughest in the league to strike out is extremely beneficial to the ball club. Odds are, when a player doesn’t strike out often, they get on base more. That is no exception for the former Pirates leadoff man, who boasts a .388 on-base percentage, good enough for 13th in all of baseball, which now is the best on the Padres.

Imagine a guy who can get on base at an elite clip batting in front of Fernando Tatis Jr. and Manny Machado, both of whom are in the top four in RBI in the National League. It lengthens the lineup as well. A player like Eric Hosmer or Wil Myers will bat sixth instead of fifth, leaving less breathing room for opposing pitchers.

During the first half, he hit .330 with a .860 OPS, earning himself his first career All-Star bid. In fact, he was voted as a starter into the game. Acquiring him means the Friars boast the starting middle infield for the National League in the Midsummer Classic and possess six 2021 National League all-stars.

Frazier currently leads all of baseball with 125 hits, which puts him on pace for 199 knocks this year. His splits are virtually indistinguishable. As a lefty hitter, it’s no surprise that he hits righties well, with a .333 average and .830 OPS. However, against southpaws, he more than holds his own as well, with a .299 average and an even better OPS at .850. Three of his four homers this year have come against lefties.

While he does not have an elite walk rate to go along with his excellent on-base percentage, his knowledge of the strike zone is admirable. He is among the rare “throwback” players in baseball who walk almost as much as they strikeout.

He can attack the first pitch if it’s in the zone or be patient and wait for a mistake from the pitcher. He has a very careful, conscious approach, and he knows how to put the barrel on the ball. He truly is never behind in the count, as he owns a .295 batting average when behind in the count (league average is .191).

While he will never blow you away with power (lifetime .420 slugging percentage), he can find the gaps, as indicated by his 28 doubles, fourth-most in all of baseball. It’s hard to shift on a hitter like Frazier, as he can spray it to all fields. 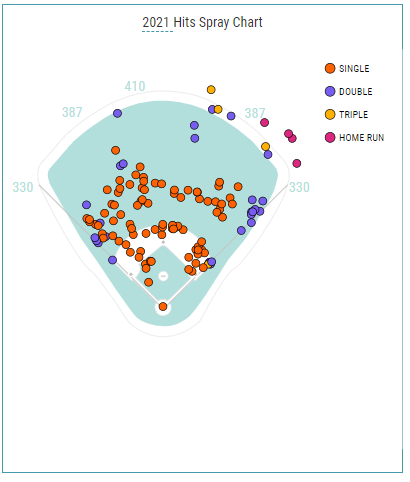 In short, the Padres get a guy who knows how to hit gap-to-gap and get on base. A player like that setting the table for the big lumber in the lineup is invaluable. Long gone are the days where the Padres struggled mightily to just not finish dead last in on-base percentage as a team. With Frazier in the mix, the Friars now have six players with an on-base percentage of at least .349 (league average is .316). 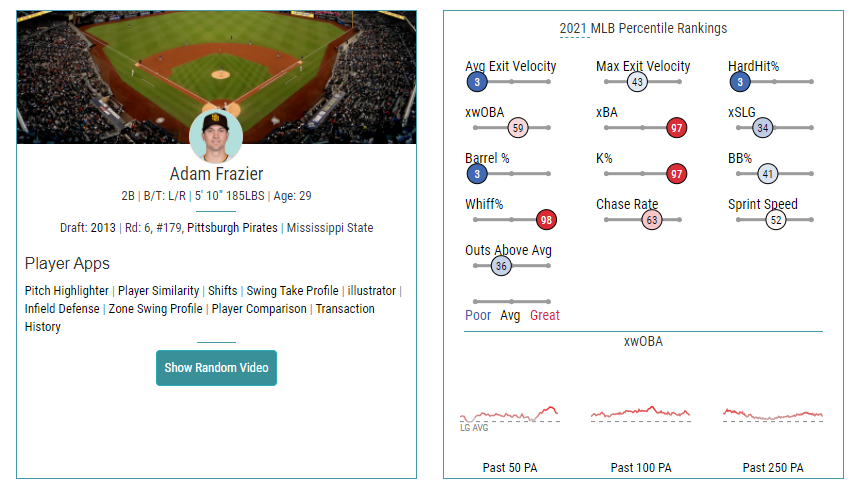 The biggest question mark hanging over this trade is where Frazier will play in the field. San Diego already boasts a 2021 All-Star second baseman in Jake Cronenworth, the position at which Frazier has 391 games under his belt. The Pirates also used him in the outfield, 107 games in left, 44 games in right, and 14 in center.

Regarding the question of where he will play, the answer is- it depends. The Friars announced Tuesday ahead of the series opener against the Athletics that Frazier would be batting first and playing left field. Tommy Pham moved to right field, and Myers was not in the lineup. Though, it was also reported that Myers is still dealing with a knee issue.

Against tough lefty hitters, there is justification to sit Eric Hosmer and move Cronenworth over to first while Frazier slides in at second. Ha-Seong Kim also can slide to any infield spot where needed. Either way, Frazier is a serviceable defender with 2 Defensive Runs Saved at second base and an even 0 in the outfield.

Having multiple players who can play multiple positions is always a formula championship teams pursue. Adding Frazier to the mix only adds more versatility in the field and depth in the lineup. He adds a ton of value. The Georgia native owns a 3.0 WAR, which is fourth on the Padres’ roster. His WAR is higher than the likes of Tim Anderson, Austin Riley, Paul Goldschmidt, Freddie Freeman, and Bryce Harper.

Native of Escondido, CA. Lived in San Diego area for 20 years. Padres fan since childhood (mid-90s). I have been writing since 2014. I currently live near Seattle, WA and am married to a Seattle sports girl. I wore #19 on my high school baseball team for Tony Gwynn. I am a stats and sports history nerd. I attended BYU on the Idaho campus. I also love Star Wars.
Tags: Adam Frazier, MLB, Padres, San Diego Padres, Trade Deadline