Breaking down the San Diego Loyal’s previous match against the Phoenix Rising, which ended in a 2-2 draw.

The San Diego Loyal were on the edge of an upset victory against the top team in the Pacific Division. In front of nearly 9,000 fans, the players were left stunned after a crazy final seven minutes of stoppage time.

The Loyal scored one goal in the 14th minute from a laser by forward Miguel Berry. Their next goal came in the 71st minute when midfielder Jack Blake bent one around the keeper to put them up 2-0. That goal gave San Diego their biggest lead of the season, but it only lasted 20 minutes. The Loyal controlled the entire first 90 minutes, but once stoppage time started, it seemed like the Rising were unstoppable.

Manager Landon Donovan started three players who recently signed off-loan. Berry, midfielder Miguel Ibarra, defender Jack Maher all contributed in the match. Berry is a Poway native and USD Alum, who is in his second stint with the Loyal. Berry scored three goals last season and scored his fourth this year in his first start. Berry took position from defender James Musa and drilled a shot from the right side of the box for the first goal of the night. It’s safe to say the Loyal would not have controlled the match the way they did without Berry.

The Loyal did everything they could to stop the Rising, and they almost did. Phoenix already attempted over 100 shots on the season before Saturday’s matchup, and that is nearly impossible to contain. Once San Diego gained that two-goal advantage, the playstyle changed completely. Donovan subbed in defender Thomas Vancaeyezeele in the 69th minute to replace forward Corey Hertzog, and then defender Morgan Hackworth to replace Ibarra in the 76th minute. That started a park-the-bus mentality where the Loyal were playing strictly to defend at all costs.

The park-the-bus strategy can backfire as it did Saturday night. Putting in defenders for forwards causes less possessional control and force clearouts. The Loyal cleared every ball they touched late in the match, giving possession right back to the Rising. During the seven-minute stoppage time, Phoenix attempted seven shots with the two connecting. Creating an opportunity to shoot seven times in seven minutes causes concern for any team. 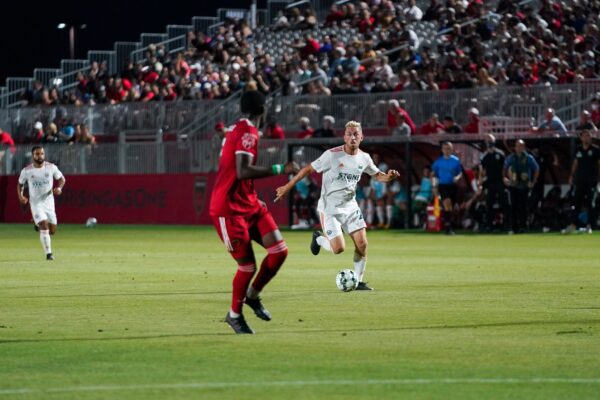 It’s hard to say what would have happened if the Loyal decided to continue attacking. Obviously, once San Diego stopped, that gave the Rising full control, and they sure took advantage of it.

Despite the draw, Donovan came out pleased with the performance.

“At the start of the game, if you said we’d play that way and we’d tie the game, we would be okay with that,” Donovan said. “We want more. And we know that we could be better. We were very, very good for most of the match, not perfect but very good. A little disappointing at the end to give up the goals of course. But still proud of the overall effort and I look at performance always more than I look at the results.  Obviously, we want to win games but that was a really good performance against the best team in the league at their place.”

The players were left in disbelief after a hard-fought battle. Donovan knows that this was a learning experience.

“The confidence to play this way…we know how to beat Phoenix.” Donovan said. “We have proven over the last 18 months. (We’ve proven) that we are almost the only team in this league that knows how to beat them consistently and that’s powerful. We need that. We need that now over 90 minutes but in the first half the way we dominated the game is what we know we can do against them. Maybe if we’re a little more clinical we’re 2-0 or 3-0 at halftime instead of 2-0, 3-0 later in the game. It’s still an overall good performance and we can continue to keep getting better. I’m absolutely proud of the performance and there’s no time to be upset we just have to get going because we play again Wednesday.”

The Loyal will play again this Wednesday, June 9, at 7 p.m. They face Orange County SC on the road for the first time this season. The Loyal are (1-4-1) with four points, and Orange County SC (2-2-0) with six points.

Sockers travel to Ontario to kick off brutal fortnight

Sockers fall flat in 2nd half, lose in OT